The following guest post is by conservator, Gwendoline Lemée:

Unusual and unique objects have the power to intrigue and fascinate us, and one such object is Hannah’s Diary which arrived on my bench in the summer of 2017. How delightful it is to work on a unique object and extend its life beyond what could have been hoped.

Hannah’s Diary is a fairly small manuscript made of 79 bifolia of ivory letter paper wrapped in a poor-quality greyish card and roughly assembled with two treasury tags pierced through the spine margins. It is written in black ink all the way through, without gaps, paragraphs or images, but the text gives us a rare and intriguing glimpse into the daily life of its author.  The manuscript records every activity of every day that Hannah Cullwick, who was a servant and married to Trinity College’s alumnus Arthur Munby, undertook in the year 1863. It is part of the Munby Archive.

The manuscript was examined in the Wren Library and the treasury tags were removed to allow this work to be done.  The holes the tags left behind were worn and most of them had torn out to the edges of the leaves.  In addition, the manuscript had been repaired in the past with gummed paper saved from the edges of sheets of postage stamps. It was clear that conservation was needed to prevent the damage from becoming worse and to prevent loss or further damage to the edges of the loose leaves. The original binding – if we can call it such – was causing damage to the manuscript, and preserving the leaves in it was therefore not a suitable solution. This is why, after consideration of the use and condition of the manuscript, it was decided to rebind it in a limp vellum binding.  This structure provides protection to the leaves, is durable, and has good opening characteristics, allowing readers to use the book safely in future.

The bifolia were cleaned of loose surface dirt with a soft conservation rubber called smoke sponge. Tears and holes were then repaired and infilled using various types and thicknesses of Japanese papers adhered with purified wheat-starch paste. Bifolia were then guarded in pairs (leaving a 10mm gap between bifolia to allow for a good opening) to form gatherings of six bifolia which allowed for the textblock to be sewn through the folds of the new guards. Narrow strips of western paper were inserted on the inside and outside of each gathering at the spine fold to compensate for the thickness of the guards and build up a strong spine. The original grey card cover was also guarded and sewn with the rest of the textblock.

In order to hold the loose guards in place during sewing, the gatherings were held together temporarily with loops of thin polyester thread. Three sewing supports were made of alum-tawed skin lined with linen braid.  The two materials combined created a tear-resistant but fairly soft sewing support. They were then split in the middle to allow for a herringbone stitch sewing which makes for a very strong and flexible structure. Once the manuscript was sewn, the spine was pasted and lined with Japanese paper. The manuscript was now safe to read.

The covering was made of three pieces of calfskin parchment, cut, shaped and folded following a combination of various techniques found in the literature and adapted slightly to suit this particular manuscript. The parchment cover is entirely removable as it is held to the manuscript only by the laced-in sewing supports and tucked endleaves, not by adhesives. It is a sound binding, bringing enough support and protection to the manuscript as well as being well-suited to the nature of the paper leaves.

Finally, a bespoke cloth clam-shell box was made to protect the manuscript and keep it together with the remains of the original binding: the treasury tags and old stamp-paper repairs. 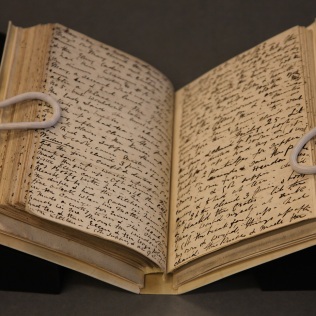 Bespoke clam shell box with the remains of the original binding