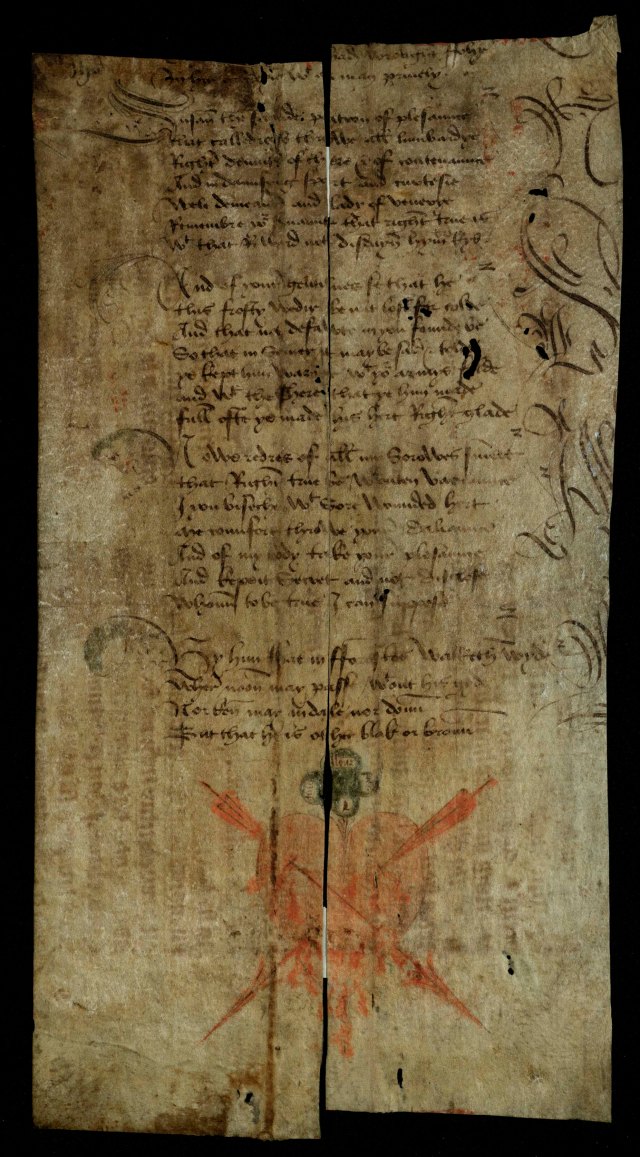 Trinity manuscript R.2.70 is a parchment fragment which has a Middle English love lyric written onto one side.  While at some point in its history the parchment formed part of a binding, its original function is unclear. It is within the bounds of possibility, though, that this decorated poem was composed and copied out as a missive for delivery. It may thus constitute a very early example of a Valentine’s day message.

The verse is written in a late fifteenth-/early sixteenth-century hand and is addressed to a woman named ‘Susane’, asking for merciful treatment and offering compliments of a mostly conventional kind. Late medieval poems were sometimes addressed to named individuals and it is tempting to believe that ‘Susane’ was a real woman. Ballades such as this were often designed as lovers’ petitions with the envoy (the concluding lines) offering the opportunity for the lover to sign off in some way. The two couplets at the end of this lyric apparently identify the writer in the form of a cryptic puzzle: “By him that in forestes walkethe wyde/Where noone may passe with out his gyd/Nor kene may in dale nor doune/But that he is other blake or broune”. This may be a hidden message to the recipient hinting perhaps at the name Darkwood, Greenwood or Whitewood. This address to a named person and final cryptic signing off are still recognizable today as characteristic features of a Valentine.

Furthermore, the verse is carefully decorated and embellished with calligraphic initials, some containing profile faces.

At the bottom a bleeding heart is pierced crosswise by two arrows, above which is a small four-leafed clover that contains words which are now indecipherable but which may include ‘true’ and ‘ I love’. 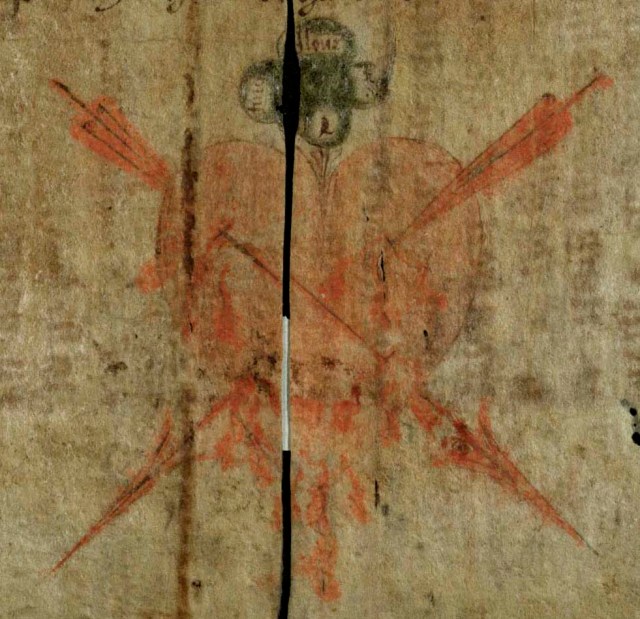 In the late medieval period these symbols – the pierced heart and the quatrefoil – would have been familiar in devotional contexts, but also in secular ones. Occasional poems were written for St Valentine during the fifteenth century and although this poem does not explicitly refer to the saint, its allusions to frosty weather (line 9) and to summer as a season expected in the future (line 11) allow for the possibility that it was composed at the end of winter and conceived as a Valentine’s day gesture.

Medieval Valentine poems are now mostly preserved within longer works. However they were presumably also sometimes passed from person to person on single sheets of parchment or paper in a similar way to the exchange of other love tokens such as rings. It is tempting to suppose then that this carefully composed and decorated poem may have been sent to the woman who was its subject, in much the same way that Valentines are exchanged today.

This site uses Akismet to reduce spam. Learn how your comment data is processed.