A new book by Edward Wilson-Lee, Fellow of our neighbouring Sidney Sussex College and a regular reader in the Wren Library, tells the scarcely believable – and wholly true – story of Christopher Columbus’s bastard son Hernando, who sought to equal and surpass his father’s achievements by creating a universal library. Here we take a sideways look at Christopher Columbus and his son through a selection of books in the Wren Library.

This splendidly illustrated account of the great cities of the world, printed in five large volumes in 1612–18, devotes a single plate to the three cities of Seville, Cadiz and Malaga. The perspective of Seville shows Hernando’s house, ‘La Casa de Colón’, next to the Puerta de Goles. The text was compiled by Georg Braun, and the engraved plates, hand-coloured in this copy, are largely the work of Franz Hogenberg. 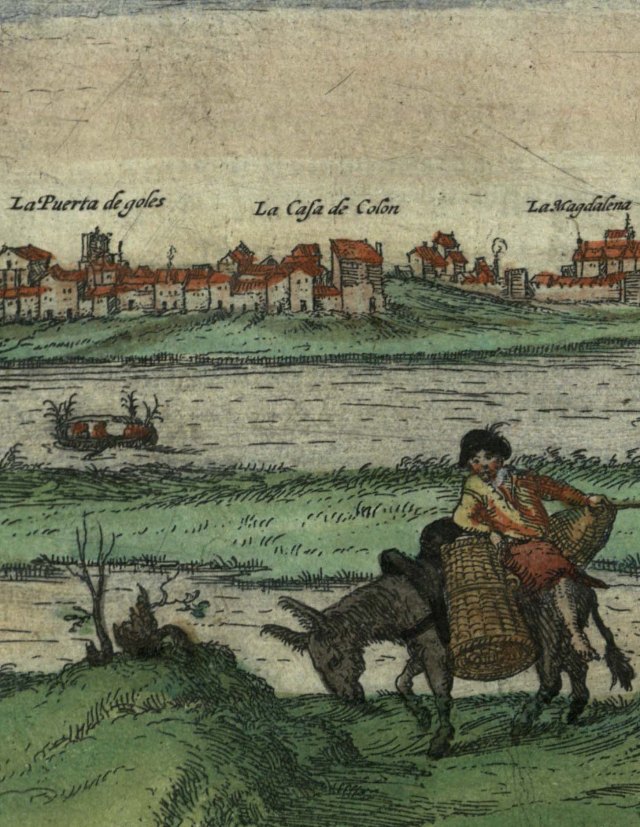 As a youth, Hernando Colón spent years travelling in the New World, one of them marooned with his father in a shipwreck off Jamaica. He created a dictionary and a geographical encyclopedia of Spain, oversaw the first modern maps of the world, visited almost every major European capital and associated with many of the great people of his day, from Ferdinand and Isabella to Erasmus, Thomas More and Albrecht Dürer.

“Their words have gone out to the end of the world”

One of the first ever biographical notices of Christopher Columbus is printed rather unexpectedly in the margins of this scholarly edition of the Book of Psalms, printed in Genoa in 1516. It is apparently the first polyglot work ever published, and presents the Psalter in eight columns with the Hebrew, a literal Latin version of the Hebrew, the Latin Vulgate, the Greek Septuagint, the Arabic, the Chaldean (in Hebrew characters), a literal Latin version of the Chaldean, and scholia in the right-hand column. The editor, Agostino Giustiniani, generally made brief notes in the final column relating to textual questions, but an exception is made for Psalm 19, at the fourth verse:

Their line is gone out through all the earth, and their words to the end of the world.

A lengthy biographical notice about Christopher Columbus is attached to this verse and spreads over the following five pages. Columbus had earlier used this psalm to substantiate his claim that his discoveries were not random events but rather a key part of God’s plan. Through this widely-read edition of the psalter, his discoveries became part of the meaning of the psalm, the fulfilment of its prophecy. Unfortunately the note is riddled with factual errors, and it would not have been pleasing to Hernando that it opens with the damaging allegation that Columbus was vilibus ortus parentibus—born of low stock.

Columbus in the service of Pope Innocent VIII

The earliest reference to Christopher Columbus in the holdings of the Wren Library appears in this history of the lives of the popes, printed in Venice in 1507. The book is spuriously attributed to Petrarch, who died in 1374. The account of Pope Innocent VIII, who like Columbus was Genoese by birth, reports that it was during his pontificate that Columbus discovered the New World. This echoes the inscription on the tomb of Innocent VIII at St Peter’s in Rome which states ‘Nel tempo del suo Pontificato, la gloria della scoperta di un nuovo mondo’ (‘During his Pontificate, the glory of the discovery of a new world’). But in fact Innocent VIII died on 25 July 1492, a week before Columbus first set sail across the Atlantic.

The ‘Columbeidos’ is the earliest attempt by any poet to treat Columbus’s discovery of the New World as heroic fantasy. It was written in Latin in the Vergilian epic style by the grandly named poet Guilio Cesare Stella (1564–1624) and takes up more than 1700 lines of Latin hexameters. The poem is dedicated to Philip II, King of Spain and Prince of the Indies. It was first printed in London in 1585, and this Roman edition dates from 1590.

Hernando Colón bought a copy of this book, the second edition of Thomas More’s Utopia, in Ghent in 1520, and read it in Brussels in 1522. Many aspects of the book were reflected in Hernando’s life: voyages of exploration, maps, printing, language, and the search for forms of perfection hitherto unknown. This edition includes a map of the fictitious country designed by Hans Holbein’s brother Ambrosius, and a short poem printed in the Utopian language and using the Utopian alphabet, written by the founder and first king of the country, Utopus. The printer (Froben of Basel) went to great trouble to have a special set of type cast for this poem, and it seems that it inspired Hernando to devise his own secret alphabet of very similar ‘biblioglyphs’ to describe the books in his beloved library.

‘Columbus’ is one of Alfred Lord Tennyson’s later poems, written in 1879–80 and first published in Ballads and Other Poems (1880). His son Hallam records that it was composed at the request of ‘certain prominent Americans that he would commemorate the discovery of America in verse’. Tennyson derived his view of Columbus as a religious enthusiast with a visionary mind from Washington Irving’s Life and Voyages of Christopher Columbus. The poem presents the aged navigator, now ignored and living in poverty, defeated by the selfishness and lust that had triumphed over Columbus’s ideals in the Spanish court. The poem has been understood as conveying Tennyson’s own fears about the decay of society in his later years.

Edward Wilson-Lee, The Catalogue of Shipwrecked Books: Young Columbus and the Quest for a Universal Library (London: William Collins, 2018)