The last of the five manuscripts lent by Trinity College to the British Library’s Anglo-Saxon Kingdoms exhibition is one of the most intriguing and visually appealing manuscripts in the Wren Library. B.16.3 is a collection of poems by one of the most talented writers of the ninth century, a monk named Hrabanus Maurus. Hrabanus (or Raban) was born in Mainz around 780 and became a child oblate at the abbey of Fulda. He would later return to Fulda as Abbot in 822, and then to Mainz as Archbishop from 847 until his death in 856. 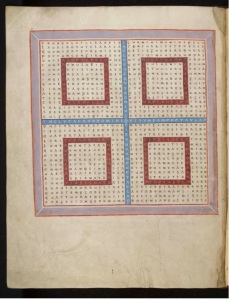 Hrabanus’ poems in praise of the Holy Cross are among his earlier writings, and were probably written around 810. They consist of an extremely sophisticated combination of verses and images as a means of explaining numbers and colours associated with the Holy Cross. There are 28 poems, written in hexameters but laid out in grid form, each of which is accompanied by a commentary on the facing page explaining the meaning of the verses. The main poem is referred to as the ‘figural poem’ (carmen figuratum), but each contains within it a subsidiary poem (versus intextus) which represents the central concepts of the larger poem. These verses consist of letters picked out from the figural poem in particular colours and patterns, each time assuming the shape of the cross. 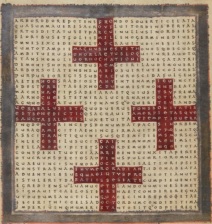 Hrabanus’ poems were widely known in the intellectual centres of medieval Europe, and around 80 manuscripts survive today. Most of the ten dating from the ninth century may be associated with the places at which he worked. The copy in Trinity College dates from the mid-tenth century, perhaps as early as 930, and its place of origin is very difficult to ascertain. The general appearance of the manuscript and the form of the letters in the poems is very similar to a manuscript from Fulda now in Vienna, but the facing-page commentaries use a square minuscule script which is only found in England. One theory is that the manuscript was a collaboration between an English scribe and a scribe and illuminator from Fulda. It is known for certain that this manuscript was in England by c.1000, and it is possible that it was in the abbey of Glastonbury.

Recent technical analysis of the colours found in the Trinity Hrabanus has revealed an exceptionally rich palette using almost 40 different pigments. Most remarkable is the artist’s subtle mixing of colours to obtain particular shades. The images below show details of the presentation frontispiece, photographed through a microscope at magnifications of between 30x and 75x. Under magnification, the simple pink shading of a face is revealed to be a blend of red lead, lead white, orpiment and possibly some earth pigments. 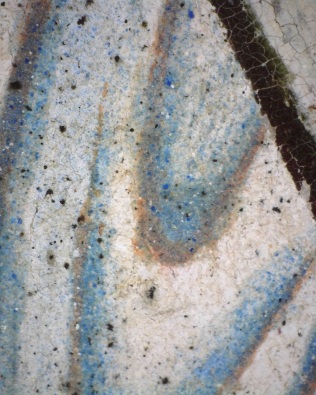 Images of details of the frontispiece using optical microscopy. © The Fitzwilliam Museum, reproduced with the kind permission of Dr Paola Ricciardi and Dr Stella Panayotova.

Fuller details of the recent scientific analysis are published in the article referred to at the bottom of this post. The most important revelation is visible on the page presenting the final poem in the collection.

The horizontal and vertical limbs of the cross both present the palindrome ‘ORO TE RAMUS ARAM ARA SUMAR ET ORO’ – ‘I pray, O cross and altar, to be saved through you’, while the letters written on the body of the monk kneeling before the cross contain a verse requesting salvation for Hrabanus.

Surprisingly, it is Hrabanus’ blue undergarment which provides vital evidence for the continuing debate about the place in which the manuscript was created.

By using visible light-induced luminescence (VIL) imaging, it has been possible to identify the rich blue pigment used on eleven pages of the Trinity Hrabanus as Egyptian blue, a synthetic pigment made by fusing sand with calcium and copper compounds at high temperature. This compound is intensely luminescent under near-infrared light, and can therefore be easily distinguished from other types of blue.

Egyptian blue was widely used in Antiquity (especially in Egypt), but only much more rarely employed in the Middle Ages. With one very small exception, it has never been identified as being used in any Carolingian or Ottonian manuscripts from continental Europe. It has, though, been found in a number of manuscripts written in Anglo-Saxon England, and therefore provides rather strong support for the suggestion that the Trinity Hrabanus was created in England, albeit by a Frankish scribe working alongside an English scribe. This new discovery enables one of the masterpieces of continental literary production of the ninth century to earn a secure place in the British Library’s display of tenth-century English creativity.

For more information on the non-invasive techniques of colour analysis and pigment identification in medieval manuscripts see the website www.miniare.org.

One thought on “Anglo-Saxon Manuscripts in Trinity College Library: Poems on the Cross, with a new kind of blue”