The 150 Psalms were central to Christian worship throughout the Middle Ages. Monks would recite the Psalter in a regular cycle, in some monasteries continuously through the day and night, and would learn their texts by heart. A recent blog featured one of Trinity’s largest and most famous manuscripts, The Eadwine Psalter, but here we take a look at some of the other illuminated Psalters in the Wren Library.

This exceptionally fine glossed Psalter combines the text of the Psalms with the magna glosatura of Peter Lombard, and dates from the third quarter of the twelfth century. It was made for and owned by Herbert de Bosham, one of the close circle of Thomas Becket. It might be seen to represent a scholarly homage to the Lombard, who had been Herbert’s teacher, and to Herbert’s other masters. Initially intended for Thomas Becket himself, it was eventually dedicated to William, archbishop of Sens, after Becket’s death. This opening displays King David and Christ. The Psalm verses are written in larger script, with various commentaries surrounding them. Augustine and Cassiodorus, the principal authorities on the Psalms among the Church Fathers, are quoted and named in the margins.

This Psalter dates from the beginning of the thirteenth century, and is likely to have been produced in London. Each Psalm is preceded by an illuminated initial letter, with larger initials for the major divisions of the Psalter. The initial letter Q depicts the scene of Doeg the Edomite killing Ahimelech with an axe. This story is recounted in the First Book of Samuel, and the rubric written on the facing page at the end of the Psalm records that Psalm 51 was particularly associated with this brutal event.

This richly decorated Psalter was created in London, probably in the 1220s, for an Augustinian patron. In addition to a liturgical Calendar, the Psalms are preceded by a collection of ten pages of scenes from the Old and New Testaments, followed by a full-page depiction of the Last Judgement, and on the final page, shown here, the Torments of Hell. We would expect the first Psalm, on the facing page, to have been preceded by an elaborate illumination of King David, but this is now missing.

This Psalter was probably written in the North-West of France in the mid-thirteenth century. An inscription at the start of the book records that it was given to the Augustinian Priory of Goring, in Oxfordshire. Psalm 52 begins ‘The fool hath said in his heart: There is no God’, and is often accompanied as here by a picture of a fool. More unusually, this fool is holding a club as well as a small bread or communion wafer, referring to a later verse in the same Psalm, ‘Have the workers of iniquity no knowledge: who eat up my people as they eat bread, and do not call upon God?’

This remarkable Psalter shows the Psalms in parallel in Hebrew and Latin. It was written in England in the thirteenth or fourteenth century, perhaps for a Franciscan house, and provides important evidence of the study of Hebrew in medieval England. The inner column on each page presents the Hebrew text, complete with vowel signs and with a literal interlinear translation of individual words into Latin. The central column shows the Hebraic version of the Latin Psalter, and the outer column the Gallican version.

Although now in poor condition, this Psalter was originally created to a particularly high standard, in the late thirteenth century. A few local saints in the Calendar at the start suggest a connection with Oxford. The initial ‘B’ for the first Psalm displays the Tree of Jesse, with King David holding a harp and Goliath’s head impaled on a sword, the Virgin suckling the Child, and Christ in Majesty, surrounded by four prophets with scrolls. On the outer margin of this page, and on several later pages of this Psalter, illuminated letters have been pasted in as ornaments, cut out of a Bible of the mid-thirteenth century. This peculiar action may have been undertaken by or for William Clarkson of London, a later owner of the book who added a full-page portrait of himself in the fifteenth century.

This small Psalter was written in East Anglia, probably around 1300. Unfortunately all of the large initials at the major divisions of the Psalms have been removed by a previous owner, but the pages that remain include some grotesque figures in the margins and line-fillers of particularly fine execution. This page includes a fish with two heads and a dog dressed as a bishop. Other creatures are shown below: 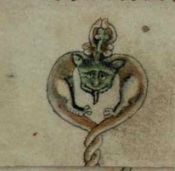 This early-fifteenth-century Psalter is unusual in combining the Psalms not only with a liturgical calendar, but also with two sets of versified prayers. The first is an Office of the Holy Face, commemorating the appearance of the face of Christ in the veil of St Veronica, and the second, shown here, is a prayer on the Five Wounds of Christ, accompanied by an illustration of the wound made in Christ’s side by the lance during the Crucifixion, and by a drawing of all of the instruments of the Passion. The rubric records that contemplation of these images will buy the reader 140 days of remittance from Purgatory. These poems were particularly popular in the north of England, and this manuscript was almost certainly produced in York.

This Psalter was written in England in the fifteenth century, but has so far proved difficult to localise. The final page of the Calendar is shown here, alongside the first Psalm, with a grandly illuminated border and a rather aged depiction of King David in a scarlet robe lined with ermine. As is usual in English calendars, the feast of St Thomas of Canterbury, murdered on 29 December 1170, has been erased, following the proclamation by Henry VIII in 1538 that Thomas Becket was no longer to be considered a saint, but ‘rather esteemed to have been a rebel and traitor’.

This site uses Akismet to reduce spam. Learn how your comment data is processed.