A previous blog celebrated the 300 year anniversary of the publication of Robinson Crusoe in 1719. From the outset, the popularity of Defoe’s novel gave rise to a whole genre of new work known as ‘Robinsonade’. This literature employed quintessential elements from Robinson Crusoe such as shipwrecked sailors, pragmatic realists and saved pilgrims. The first Robinsonades were travel and adventure stories, but the genre developed to include both narrow variations of the story through to very different re-imaginings.

One of the most curious early British examples is The Life and Adventures of Peter Wilkins, a Cornish Man by Robert Paltock, published in November 1750. The novel was more popular on the continent and was translated into French in 1763 and abridged into German in 1767. It was reissued in England in 1783. A 1784 edition of Peter Wilkins in two volumes has recently been acquired by the library (U.13.75). It was printed in Berwick and dedicated to Elizabeth Percy, countess of Northumberland (1716–1776). Paltock, an attorney turned writer, died in 1767.

In the 19th century, Peter Wilkins enjoyed much greater popularity particularly with Romantic poets including Coleridge and Shelley and was re-printed many times. It also inspired several melodramas and pantomimes.

At sea, Peter Wilkins is captured by a French privateer and is sold into slavery. He escapes captivity but is then shipwrecked and spends several months living on a rock. He finds an escape route through a subterranean cave to the land of Graundevolet. Like Crusoe he finds fruit and vegetables and makes his own bread but longs for company.

He meets and falls in love a ‘gawry’ or winged woman called Youwarkee and together they travel to the land of ‘glumms’ (male) and ‘gawrys’ (female) who are able to float or fly with the aid of a membrane called a ‘graundee’. On this island – Normnbdsgrsutt – he persuades the King to abolish slavery. When Youwarkee dies he returns to England but dies on his arrival home in Plymouth.

A glossary to accompany this fantastical adventure was published with the novel. 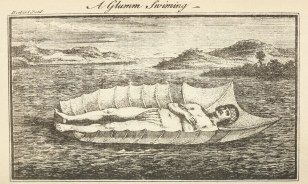 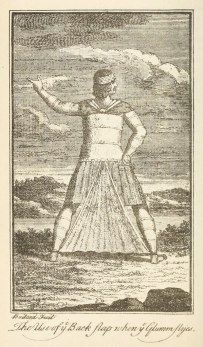 Though it belongs to Robinsonade, Peter Wilkins is now regarded as influenced more by Gulliver’s Travels by Jonathan Swift and as a fore-runner of science fiction.

One thought on “The Life and Adventures of Peter Wilkins, a Cornish Man”