In an earlier post we looked at Wifredo Lam’s collaboration with Antonin Artaud and Aimé Césaire. Here we consider his work in producing books with the writers Ghérasim Luca, René Char and Jean-Dominique Rey.

Wifredo Lam’s grandest and most complex book is the remarkable Apostroph’Apocalypse, a collaboration with the poet Ghérasim Luca (1913–94). In 1952 Luca had fled his native Romania via Israel to Paris, where his work was already known in Surrealist circles through his pre-War publications and his correspondence with André Breton. His poems often involve sophisticated word-play, and Apostroph’Apocalypse is based around the conceit of an apostrophe which breaks words into atomic particles and thereby causes apocalyptic destruction.

The Cuban Missile Crisis of October 1962 provides one of many backdrops to this publication, which was eventually completed in 1967.

Apostroph’Apocalypse was recently described in Le Monde as ‘one of the finest books of the twentieth century’.

Wifredo Lam and Ghérasim Luca travelled to Milan to work on their ambitious publication, in order to take full advantage of the skills available there. The paper was specially manufactured for this edition by Filicarta of Brugherio, with a watermark consisting of the title of the book. Luca’s text presented considerable complexity for its typesetter, Luigi Maestri, in the placement and format not only of each word, but even of individual letters within a word.

The greatest sophistication, however, was reserved for the 14 plates which Lam contributed to the book. In this work he was greatly aided by Giorgio Upiglio, the greatest Italian art printer of the second half of the century. Upiglio devised a method to allow Lam to draw freely on bitumen powder spread on copperplates, which were then heated to fix the drawings before they were bathed in acid. This novel technique enabled a heightened granular texture to the impression of the plates, which gives a more visceral appearance in direct light.

René Char (1907–88), the great poet whose name is associated as much with the Surrealists as with the Résistance, first discovered Lam’s work at the Galerie Pierre in 1945. The initial shock of the violent forms of Lam’s paintings and the life represented in them was mitigated by the warmth and refinement of the artist’s personality when they met the following year. Their first formal collaboration came in 1953 with Le Rempart de brindilles (The Battlements of Twigs), a brief meditation on the nature of poetry to which Lam contributed 5 etchings.

Char and Lam worked together on a grander scale many years later in Contre une maison sèche (Against a Dry House), a book presenting 17 aphoristic verses by Char alongside 9 large etchings by Lam. The images are in dialogue with the poems, intended not as illustrations so much as ‘illuminations’. Char’s concise texts aim for the re-establishment of ‘a sovereignty within language’. Each page confronts stark images of a freedom present within the material world with enigmatic reflections on history and the corruption of human consciousness. Lam’s plates meanwhile convey explosive movements, fulgurances or metamorphic bolts of lightning.

As with Apostroph’ Apocalypse, Lam worked on the plates at Giorgio Upiglio’s workshop in Milan. The book was published in Paris by Jean Hugues in a luxurious edition on vélin de rives paper in a raw silk-covered folder and slipcase. The typeset portions were printed at the Imprimerie Union in Paris before the sheets were taken to Milan for the printing from plates. The plates are etchings with aquatint in colours, and unusually are cropped to fit the already large pages (380 x 550 mm): the copperplates used for the publication extended a little beyond the edge of the page.

A mock-up of Contre une maison sèche was first displayed in 1971, but it was not until 1976 that the publication was eventually completed. In 1972 Char wrote to Lam to encourage him to finish his work, looking forward to the publication of the book and writing that otherwise the ‘dry house’ of the title would not only dry out but also (financially) ‘dry him out’:

In a pamphlet issued for the exhibition of the publication of Contre une maison sèche in 1976, Char explains some of the inspiration that lay behind Lam’s vivid plates. He describes his first sight of Lam’s paintings, in the Galerie Pierre Loeb in Paris, in 1947 or 48:

Two knotty canvases, aggressively erected from the ground, released their violent and haunting aroma of forests reconciled with imminent characters (feet and hands were trying to make an appearance) [. . .] The colours of the Cubists were the only ones that suited their works; the only colours as well that the superb works of Lam required on that day.

At the end of Wifredo Lam’s life he formed a new collaboration with the poet, art critic and writer Jean-Dominique Rey (1926–2016). Their joint publication L’Herbe sous les paves was Rey’s first collection of short stories, a genre in which he was to become well known, and was Lam’s last work, published only weeks before his death.

The title of the collection, L’Herbe sous les pavés, refers to a saying from the revolutionary events of May ’68, ‘there is grass growing under the cobbles’. This was later adapted more famously as ‘sous les pavés la plage’, a reference to the piles of cobblestones forming barricades placed on sandy ground. In both forms there is a direct resonance with the underground movement. 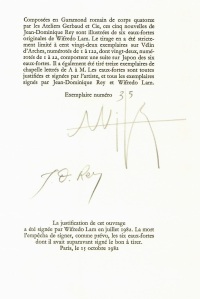 Each of the five short stories in the book is accompanied by an etching. The final plate, a very simple etching in three colours with three dogs, accompanies a story beguilingly entitled L’Aube et puis… (Dawn, and then…). Lam drew on the copperplates in his apartment in Paris. The plates were heated in his kitchen oven by Giorgio Upiglio and then etched at the studio of George Goetz. The text was printed in Paris and the plates in Milan. Lam signed all the copies in July 1982, and a notice of his death (on 11 September) was added in a second colophon.

The exhibition Wifredo Lam: livres d’artistes closes to the general public on 12 June 2018 and to members of college on 14 June, but the collection of books illustrated by Lam remains available for consultation by readers in the Wren Library.